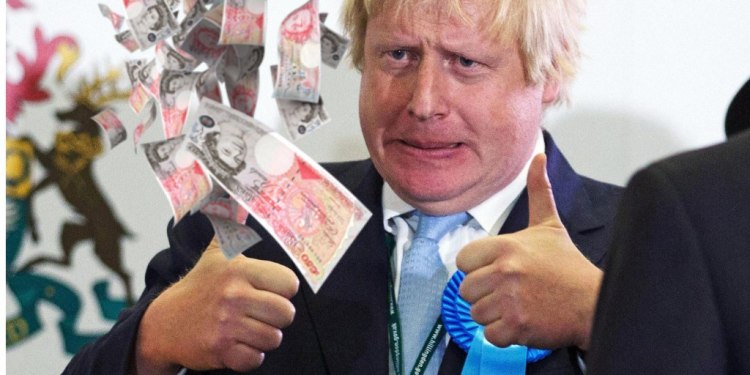 The Tory Party has long had a contempt for the people. Until Boris Johnson they used to be better at hiding it

The whiff of Tory sleaze, decay and arrogance is all around; Boris Johnson is clearly revealed as the chancer politician that everyone knew he was. But while the air is full of scandal much is passed off as caused by Johnson alone or by a few badly-behaved Tories, the problem is much deeper.

British Toryism has always had a contempt for the people. Until Johnson they were rather good at hiding it, while talking in private and showing through their actions their deep-seated revulsion at the people of the country they profess to love.

Firstly, take the current scale of Tory corruption and entitlement. Tory MPs complain that they cannot be expected to live on £82,000 per year (plus expenses and perks); Johnson says he cannot manage on his £161,000 Prime Minister’s salary.

There is a significant divide in the Tory Party on this. Party grandees elected pre-2010 for safe Tory seats think they have a right to supplement their MP salary with “second jobs”. Tory MPs elected in 2019 in “Red Wall” seats won from Labour tend to take a view informed by £82,000 being nearly three times median earnings and more than most people earn in their constituency.

Secondly, new fissures are opening up between pre-2010 and post-2010 MPs, between those with large and small Tory majorities – and how the party sees Johnson. There are very few Johnson true believers, and the nature of him winning the 2019 leadership was for many transactional. Tory MPs reached out to him as an electoral winner out of desperation and this has held together his leadership until now – rather like Tony Blair and New Labour at its peak. Once Johnson’s star finally becomes extinguished, so will his base with Tory MPs.

Thirdly, Johnson’s political antenna failed in trying to save Owen Paterson and scrap existing parliamentary standards, and being unable to say “sorry”. To say that the UK is “not a corrupt country” out loud to the world’s media is politically disastrous, as 80% of the UK public think the UK is corrupt – with 12% having doubts and a mere 1% completely disagreeing.

The inner world of Toryism is filled with disdain for the everyday folk of Britain that the party makes a great play of caring about. This is often revealed in the private thoughts of Tories in their diaries that many take delight in publishing.

Take Sasha Swire, married to Tory MP Hugo Swire, a lowly minister in the David Cameron years. Despite this the Swires were in the inner circle of the Cameron-Obsorne set and well-positioned to portray it, which Sasha did in her recent diaries.

What a picture it is of arrogance and cluelessness about the vast majority of people of the UK. Sasha Swire cannot even stand their own East Devon Tory association, writing: “They hate in, equal measure: foreigners, Europe, defence cuts, gay marriage, Liberals, the BBC, Germans, the Japanese, the coalition and garlic.”

Alan Duncan’s diaries – In The Thick Of It – show that for a certain kind of politician all that matters is advancement and a Cabinet post above everything. When the Defence Secretary post becomes vacant in 2019 he is “passed over” as “scheming triumphs over loyalty and suitability”, with the “ludicrously unqualified” Gavin Williamson getting the job.

Alan Clark’s Diaries might be remembered fondly by many but they show a man who was racist and sexist, and an open admirer of Hitler who said long after World War Two and the Holocaust that “I was a Nazi; I really believed it to be the ideal system.”

One of the literary sensations of 2021 has been the publication of the first two of three unexpurgated volumes of diaries from Henry “Chips” Channon -Tory MP for Southend from 1935-58; a heavily censored version having been published in 1967.

Channon came from an Anglo-American family and made little impact on public life and never rose above the level of parliamentary under-secretary to Rab Butler in the Foreign Office.

But he had wealth, social contacts and a desire to hobnob with the rich and famous. His diaries reveal a rich swathe of upper crust Tory England in the 1930s and 1940s. Channon pre-war is a slavish supporter of Neville Chamberlain, appeasement, and sympathetic to the Nazis; he champions Edward VIII and Wallis Simpson before abdication, detests Churchill and is anti-semitic.

The scale of prejudice along with wrongheaded judgement is staggering. Chamberlain is “the greatest man of all-time”, Churchill “a half-breed American”, while in a 1936 tour of Nazi Germany he is shown a censored version of a labour camp and approves, stating “England could learn many a lesson from Nazi Germany.”

He is given red carpet treatment by senior Nazis and talks with admiration of Goring, Ribbentrop and Goebbels, describing Hitler as “amiable” and “semi-divine”. His view of the triumph of Franco and fascism in the Spanish Civil War aided by Hitler and Mussolini is that “Germany is fighting our battles” against Communism.

As war approaches, Chamberlain is humiliated by Hitler after Munich and the dismemberment of Czechoslovakia, Channon writing in May 1939 that “all my sympathies” are with Hitler and that the press had been unfair to the Nazis.

Today the Tories look a different beast from the past. There is no longer an Empire but imperial delusions linger and there is still contempt for foreigners, immigrants, Europe and the poor. And as critically the Tory counter-story to previous failings which saw the likes of Harold Macmillan prioritise building council houses and show sympathy the working classes in the 1950s, has long gone.

Boris Johnson’s troubles and problems with truth and accountability are not some sideshow. Geoffrey Cox’s actions as an absentee MP and lack of care for his constituents is part of the raison d’etre of Toryism: a disdain for the codes and practices of civility, care and compassion and the connections that make a society. Toryism has been laid bare, a truth that was always there but cloaked in secrecy – and for that Boris Johnson has inadvertently done all of us a service.